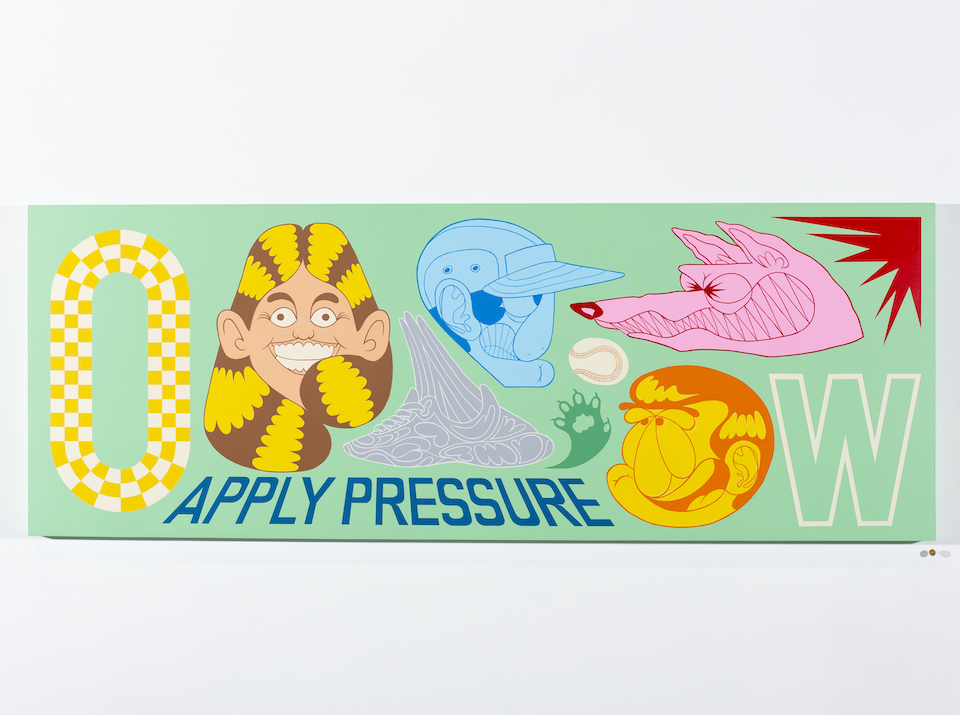 Anyone weaned on golden-age cartoons like Mickey Mouse and Bugs Bunny — not to mention latter-day loons Animaniacs and Ren & Stimpy — will be drawn to the kaleidoscopic canvases of Jose Dominguez. Born in Casa Grande, Arizona; raised in Wyoming, Colorado, Wisconsin, and Minnesota; and schooled in graphic design and studio art at Winona State University in Bluff Country, the Minneapolis-based mixed-media artist has the imagination of an Adult Swim animator and the soul of an abstract storyteller.

The first time we encountered Dominguez’s work was at “Weirdly Positive / Positively Weird,” a group show at CO Exhibitions last year. More than just a splashy mix of whimsical characters and peculiar wordplay, his Out of Touch With Much painting was like a jigsaw puzzle — a visual riddle you keep coming back to but never quite solve. We asked Dominguez if that’s the point. “Absolutely,” he said. “I love making work that’s left open-ended and incomplete.” 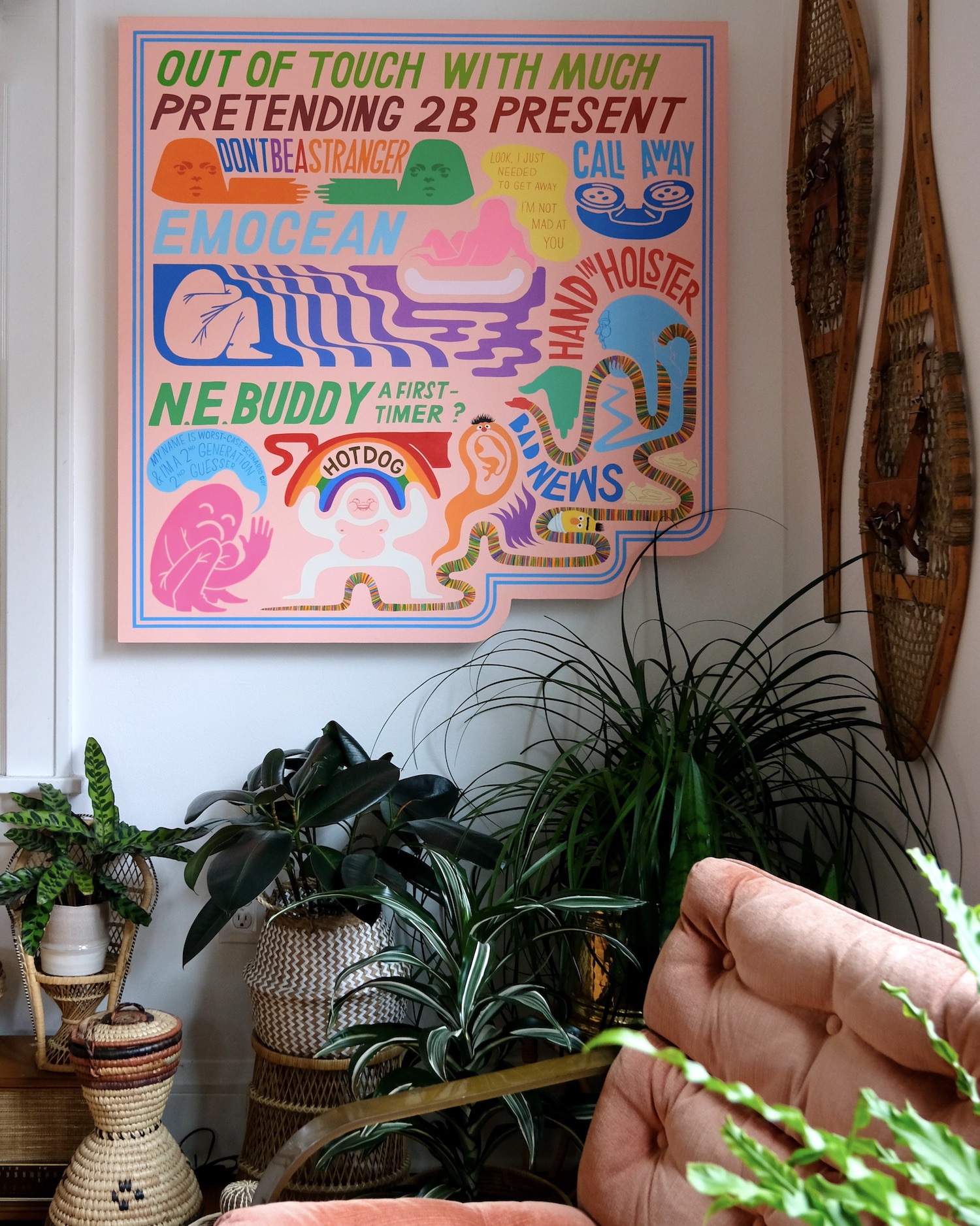 We bought the piece on the spot and now it hangs in our dining room, sharing wall space with a pair of antique snowshoes from Cabin Antiques in Grand Marais and a jumble of plants and baskets from Southside Vintage, Carousel & Folk, Tonkadale, and Tangletown.

Riddles abound at Dominguez’s new solo exhibition, I Can’t See You Smiling From Here, on display at CO Exhibitions through April 10 and available for online viewing due to current social distancing measures. The show brings Dominguez’s magical sketchbooks to life on a grand scale.

Dominguez credits his mentors — Public Functionary co-founder Tricia Heuring and Lake City artist Kjellgren Alkire — for encouraging him to embrace his “absurd, loose, and very natural” drawings as much as fully realized paintings. We’d like to shake both their hands (or at least bump elbows) for urging him down a path that’ll only get more compelling in the years to come.

Read on for more insight into Dominguez’s artistic process, his early inspirations, and what it’s like making art during a pandemic.

When did you first start experimenting with art and what did those early pieces look like?
In grade school, I memorized Goofy and handed out drawings of his face to my classmates. Throughout middle school, I would draw my favorite rappers, especially 2Pac and 50 Cent. In high school, I began painting with acrylic on found objects from a junkyard, like rusted shelves and car doors. These pieces were reminiscent of street art. Throughout college, I would draw using India ink and pens, mostly on paper and sometimes on manila folders.

My first solo show, in my senior year of college, I was using Apple Barrel craft paint on recycled cardboard from the print shop I worked at. I would collage materials like rosin paper, manila folder, and yellow envelopes together. Eventually I began collaging children’s books like Sesame Street into my work. Around this time, I was also really inspired by triptychs and religious paintings.

Who were some of your biggest artistic influences?
Early on, I was inspired by street art and interested in Barry McGee and Shepard Fairey. Throughout college, and even now, I’ve been interested in Surrealism and Pop Art. At the same time, I’m just as inspired by working artists who post content to Instagram, including Boy Kong, Daniel Davidson, and Ken Garduno.

Some of my biggest inspirations and influences these past couple of years have been the illustrators behind children’s books and cartoons like Pink Panther and Looney Tunes. I’m also inspired by the colors and process behind Risograph and screen printing. Rather than working with those mediums and using those tools, I find myself referencing or mimicking the flat, bold colors and sometimes slightly offset layers.

How about things that have influenced you over the years that aren’t directly art-related — like music and movies?
I always listen to music or an instrumental while drawing. Occasionally I’ll pull phrases from the music I’m listening to and give it new meaning. Action Bronson is always a lot of fun; my other favorites include Blood Orange, Frank Ocean, Bon Iver, James Blake, Earl Sweatshirt, Tyler, the Creator, Vince Staples, Kid Cudi, Travis Scott, and Kanye.

I’ve always been inspired by anything that offers a sense of wonder, too. I don’t know how often movies influence my work, but I love sci-fi films, Tim Burton, Wes Anderson, and Quentin Tarantino.

And you’re a big fan of cartoons and comics?
I am. I love the work of Friz Freleng, Chuck Jones, Jim Davis, and Steve Ditko. Some of my favorite characters were Bugs Bunny, Wile E. Coyote, Pink Panther, Garfield, and Spider-Man.

Do you work in any other creative mediums?
I work in Illustrator from time to time, or I’ll use it to help me figure out a painting. And I have a lot of fun making beats and sampling old records in Logic.

What was your biggest takeaway from your time at Winona State University?
I learned the importance of an arts community in order for an artist to thrive. I also learned how beneficial studio visits are in helping you grow and understand yourself as an artist.

Public Functionary described your early work as an “exploration and reflection of growing up as a Hispanic in the United States.” Can you talk a little more about that and how you’ve tackled issues of identity through art?
I had my first solo exhibition during my senior year at WSU. I celebrated my ancestry, while also acknowledging feeling like an outsider to it. I never really felt like I was part of any group — just stuck in between. I haven’t solved any issues of identity, but I do go about it differently nowadays. I used to almost feel obligated to make this type of work, and worry that I wasn’t the one to represent any group of people, and also worry that I would be pigeonholed as an artist. During my first solo show out of college, [artist and curator] Jovan Speller helped me realize that being who I am is “enough” to represent people like me. 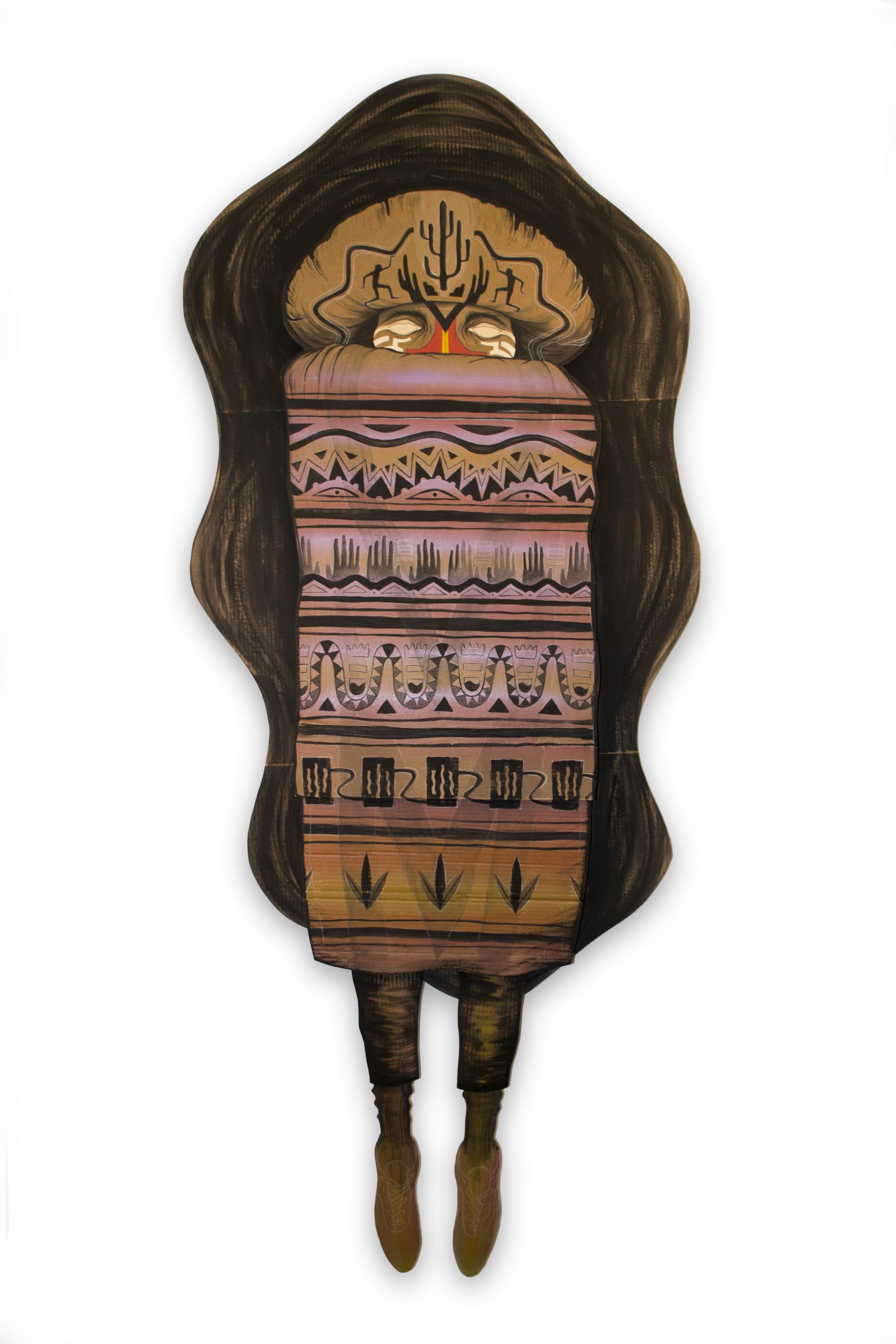 What do you mean when you say you felt stuck “in between”?
Growing up, I never felt Mexican enough among other Mexicans/Hispanics, and I never felt like I fit in among Caucasians. Like there were moments growing up where I experienced racism, and you never totally forget that. In grade school in Wisconsin, a Caucasian boy spit at me and called me a racist slur and told me to go back where I came from. Another time—in Wyoming—a group of us were going over to a friend’s house and he turned to me and said he didn’t think I should come because his father didn’t like Mexicans. Also growing up, I heard the term “white-washed” a lot. Like, other Hispanics would say that to me. My pops once told me I sounded like a “white boy” trying to speak Spanish. Those are some of the experiences that have made me feel like an outsider or in between. 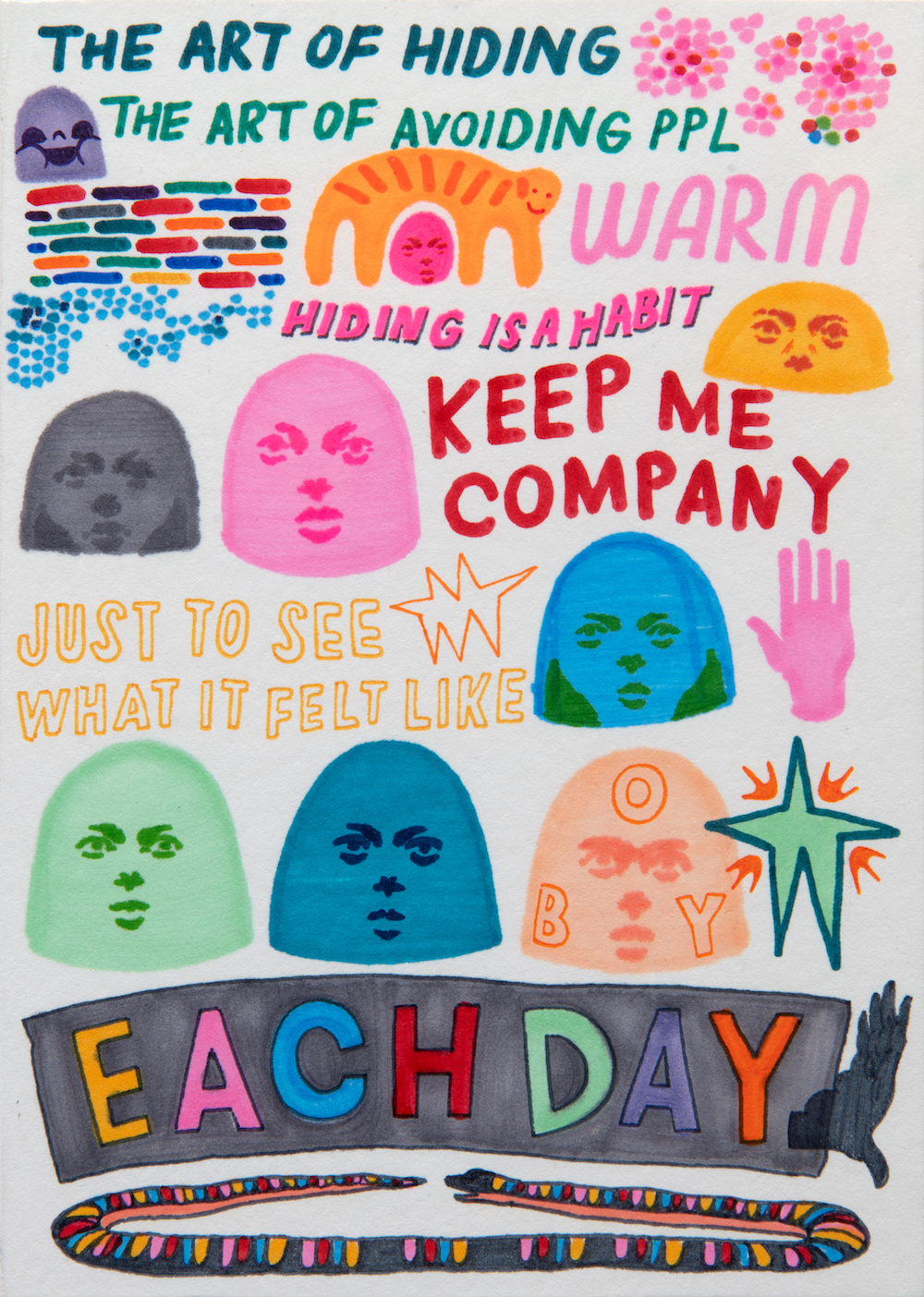 One of your biggest solo shows was The Art of Avoiding PPL, an exhibition that addressed the love-hate relationship introverts have with humanity. Is it a little surreal being stuck inside right now due to the coronavirus outbreak?
It’s definitely super weird. But it’s been kind of funny and interesting how many artists and creatives joke about this new safety precaution being no different than their regular lifestyle. I would imagine it’s a similar case for some inverts. I guess I feel the same, but there’s obviously the reality of a much greater threat to many of our lives.

Is this forced isolation helping or hindering your creativity?
I haven’t made anything new recently. From what I see online though, there’s no shortage of creativity. There are so many different things people are doing to keep each other uplifted through these weird times — memes and challenges and creative problem solving to keep businesses going. It’s pretty awesome to see how people come together and adapt to these changes. Understandably, the opening reception for my solo show was affected by what’s going on.

Tell us a bit about the theme of your current show and some of your favorite pieces.
My primary focus was trying to produce paintings that felt like pages out of my sketchbook, but I wasn’t exploring much of any theme. All of the drawings in the show are some of my favorite moments from drawing sessions I had throughout 2019. I usually sit in coffee shops after work and decompress or get some feelings out through this sort of visual journal. There are so many funny moments in each piece, but I would have to say Play Ball, Apply Pressure, and No Take Backs are a few of my favorites.

What do you have planned for the rest of 2020?
I have a project I’ve been working on that will come out in a few months, but unfortunately I can’t say much about it. You’ll just have to stay tuned on social media. If things go back to normal in the next couple of months, I might be part of another group show. Other than that, I’m looking to keep making and evolving. 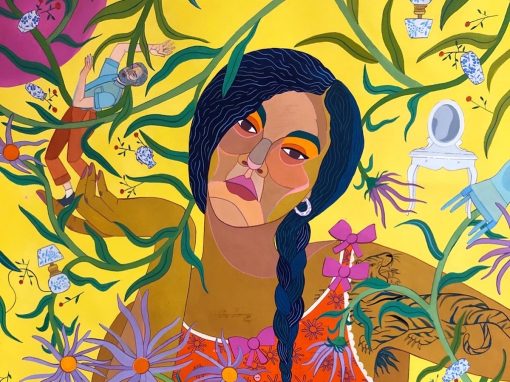 A giant among giants, she paints to heal

END_OF_DOCUMENT_TOKEN_TO_BE_REPLACED 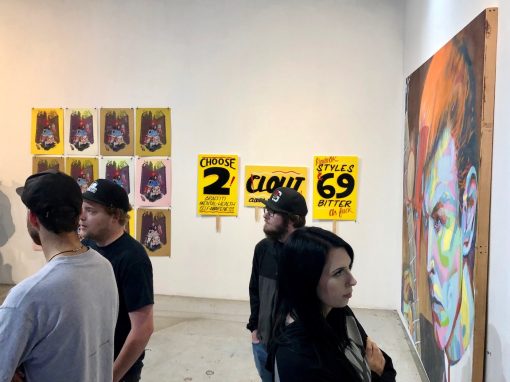