It's basically a giant tailgating party on ice 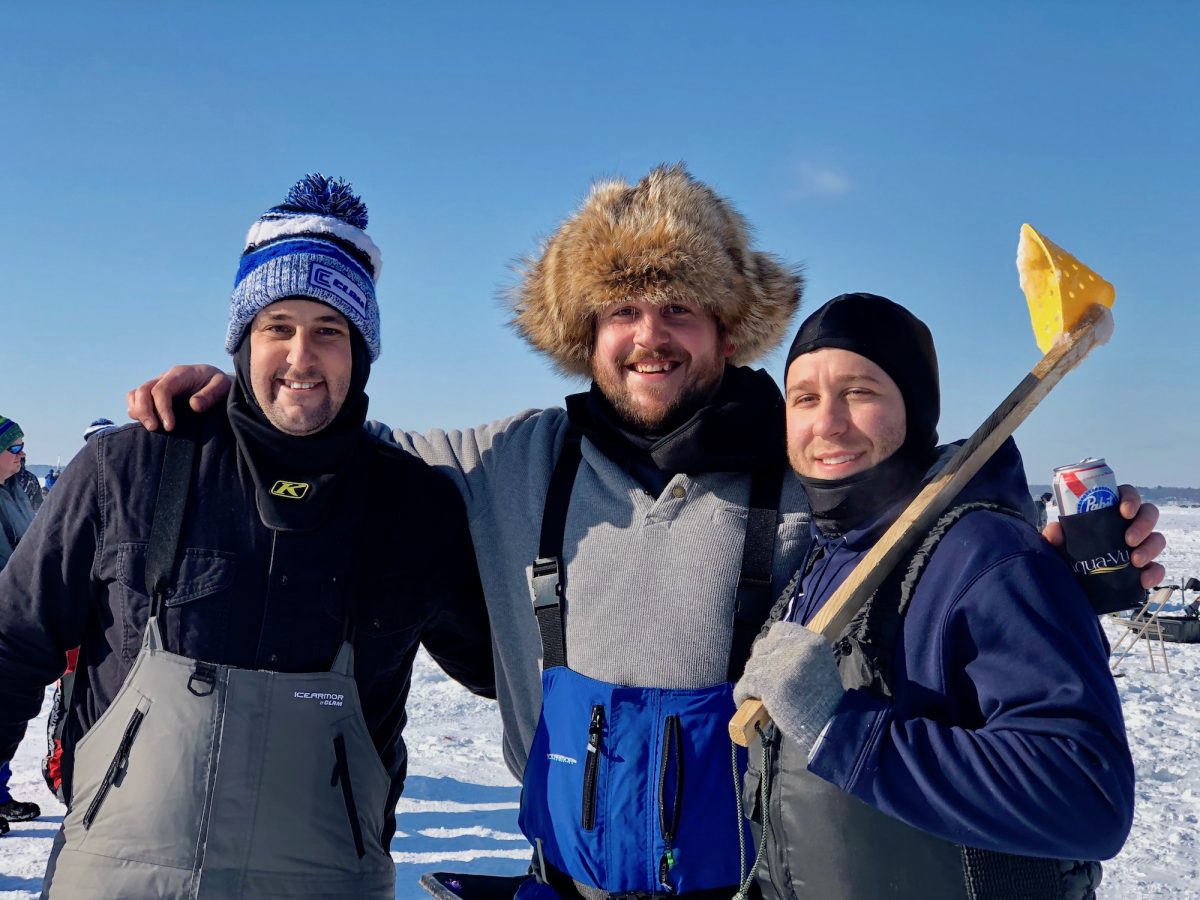 The Brainerd Jaycees’ $150,000 Ice Fishing Extravaganza on Gull Lake in Nisswa isn’t your average charity event—it’s the world’s largest annual ice-fishing tournament, drawing more than 10,000 anglers and onlookers a year since it was founded in 1991.

The main attraction in the multi-day fundraiser takes place on Hole in the Day Bay, 16 miles north of Brainerd and 2.5 hours from the Twin Cities. Because this is a competition, the ice holes are pre-drilled and fishermen/women aren’t permitted to use shelters or lean-tos. Vexilar fish-finding devices and kiddie sleds stacked with 12-packs of beer, however, are A-OK.

Friends Corbin, Matt, and Kyle, pictured at top, are from the Pequot Lake area; they’ve been catching walleye together since they were 10 years old. As we quickly learned from chatting with them and other gregarious participants in the 28th annual Extravaganza, the competition isn’t about who catches the biggest fish, it’s about spending time with your buddies—ragging on one another’s outfits, grilling venison brats you hunted and stuffed yourself, and doing shots of apple pie moonshine and “Vitamin J” (Jägermeister) with neighbors from the ice hole next door.

Though it was mostly sunny with blue skies, the mercury dipped to -7 at one point, with a windchill cold enough to freeze our nose hairs. And yet the brotherly and sisterly camaraderie we observed amongst Minnesotans—plus the stray Iowan, like Jeff, who dressed in head-to-toe Viking regalia—made us feel all kinds of warm and fuzzy.

Take the team from Women’s Outing Weekends (WOW), for instance. The ladies set up a game of Bra Pong on ice to raise money for breast cancer research. Players made a small donation, and then attempted to bounce a ball into one of the bra cups hung on a tall pegboard. If the ball landed in a cup, they won a shot of booze. If it didn’t, they got a shot of booze anyway. (At least that was our experience!)

Since the Extravaganza is a catch-and-release competition, 95 percent of the walleye, tullibee, perch, and northern pike that are caught go back in the water after they’ve been weighed. Fish that won’t make it, as determined by rangers from the Minnesota Department of Natural Resources, are donated to a fish fry for local veterans. In the final leaderboard standings, the top winner of the 2019 competition was Gary Creger of Minneapolis, who reeled in a whopper of a 5.2-pound northern pike. His prize? A shiny new truck and a year’s worth of bragging rights.

If you plan to attend 2020’s Ice Fishing Extravaganza, you’d be wise to lock in your accommodations ASAP. We stayed at the Grand View Lodge Spa & Golf Resort, which is undergoing a major expansion in 2019. Many of the fishin’ folk chose to stay there, too, as the charity auction and other events were held onsite. The lodge also runs a free shuttle to and from Gull Lake, making it a convenient base for the long weekend.